My Grammie came over from England when she was 4 years old and lived more than 100 years in the USA. My father, her son, and his sister asked me to make an urn for her ashes when she passed away in June.

Evelyn Nelson Hildebrand was widowed in the 1950’s and went to work sewing drapes. She delayed retirement, to work for unionization of her shop. She was fair and just, and took time to write her congress-person on issues she felt strongly about. In her late 60’s she re-married Dick Hildebrand. They lived in her house in Tacoma Washington, ate lunch out almost daily at MacDonalds or Jack in the Box and walked the water front. Together they celebrated her 100th birthday. He passed away a year later when he was 93. Grammie, as we grand-kids called her, went to live with my cousin Randi and her family after that.

Grammie was spunky and loved dancing. She and Dick were always first out on the dance floor. When I came to visit she always had a joke to tell, frequently over a glass of jug wine. Once, when we were out to lunch together, (she was then in her 90’s), the waitress asked her if she would like some water. “Water?”, she said, “It will only make me rust! I’ll have a beer”.  When she could no longer remember jokes, Grammie used her natural sense of humor to her advantage. When her hearing failed her, she enjoyed turning around what someone had said that she didn’t quite catch, into something quite ridiculous and funny.

Grammie’s was the first urn I have made. I thought long and hard about how it should be. As I was running one evening and mulling over my task, the concept came to me. Grammie was thoughtful, loving and kind; feminine with a beautiful spirit. She appreciated simple and good. Her urn should capture that essence. I chose a flower shape and made it curvy. The colors, because she wore reds and pinks when she dressed up, and her living room was bright, warm and yellow. I made her urn with love. This project was an honor and a challenge which I thoroughly appreciated. It allowed very special  time to remember her.

Stick small succulent in round vase. Tough to decide which color looks best. They all looked good. Each brought out different colors in the plant. But it needed to be just a bit higher. A little sand does the trick. Now its a gift! I take advantage of the moment and snap some shots. The best one was the one taken when I returned to the kitchen a few hours later. Lower sun and long shadows make the moment.
I got my succulent at Terra Bella Flowers… there are still some left.

I ate the clementines on my way home. Succulent! 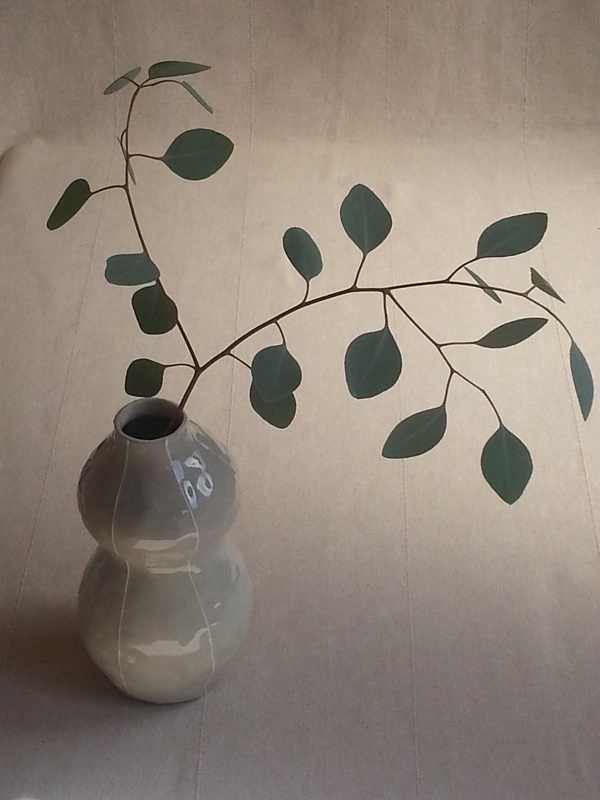 Saturday’s bouquet has been whittled down to one last un-wilted sprig. As I twist and position the vase to be photographed, increasingly the branch becomes the object of my focus. Like a mobile by Calder, the leaves and their joints circulate in space creating shadows and patterns (that distract from my lovely handmade torso vase!) Soft, silver green shapes are simple and graphic, bringing calm to the kitchen I stage my shoot in. The vase I ponder has similar qualities. It acts as an anchor for the floating foliage. A feminine form in warm gray with thin white stripe detailing, the vase has its own sculptural presence. Equally important is its supporting role; to let the contents take the stage.

Alternate use for tiny sake cups: salt dishes. This pink flaky salt came from the Murray River in Australia. Bringing it back to the USA in my hand baggage caused me some delay in customs. After convincing the authorities that it really was only salt, I discovered that it is easily found at my local market. Much of the pleasure of the specialty salts for me is in the variety of the texture and color. These soft, apricot pink crystals dissolve on the tongue and add sparkle to food. Hawaiian black lava salt that I purchased for the photo shoot was true to its name, possessing the texture of crushed lava. However, it provided a good color contrast to the pale hued dishes as well a curious flavor contrast to the Murray River salt.
These small dishes have been on the kitchen table in the studio for days now. I snap photos of them when the light is right, sometimes dipping in a wet finger. This Monday, when I was done for the day and locking up, I noticed that my shadow on the table made these amazing wave patterns visible. The resulting images seem to capture the “power of salt”. I left with my new images, thinking beyond color and texture and began to ponder the necessity of salt to our bodies and about its history on planet Earth. Salt, pretty powerful stuff!